2000: The expanded Emergency Department opens as does the new MRI Centre. At the Branson Division, the Community Care Centre and Ontario Breast Screening Program open.

2001: NYGH becomes the first hospital in Canada to offer integrated prenatal screening, a test that reduces the rate of false positives for certain birth defects.

2001: The Emergency Department is renamed the Charlotte & Lewis Steinberg Emergency in honour of their $2 million donation.

2002: Bonnie Adamson takes over as President and CEO. 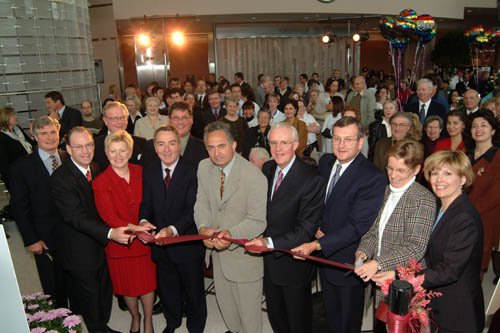 2003: The SARS outbreak hits and NYGH is at the centre of a second outbreak, which forces the closing of all hospital services for six weeks. Nelia Laroza, a registered nurse, is the first Canadian health care worker to die from SARS. NYGH is a leader in the Toronto Rocks music festival that marks the end of the SARS outbreak.

2004: The urgent care facility at the Branson Division reopens with a new name, The RapidCare Clinic, and new hours.

2006: The Ministry of Health and Long-Term Care asks NYGH to partner with the University Health Network to develop sustainable patient-flow techniques that can be used across Ontario.

2006: The Cataract High Volume Centre opens at the Branson site in a partnership with Markham Stouffville, NYGH and Humber River Regional hospitals.

2007: The first phase of a hospital-wide information systems strategic project to support patient safety, quality patient care and patient- and family-centred care launches. It is widely implemented in 2008.

2007: The Gale and Graham Wright Prostate Centre opens at the Branson site with the help of a $1-million gift from the Wrights and a further pledge to match other donations up to $1 million.

2008: The Canadian College of Health Service Executives honours NYGH for its work in improving patient flow.

2008: Construction begins on an extension of the parking lot that adds 462 new spaces.

2008: NYGH becomes the first hospital in Ontario where every cancer surgery patient has their operation within the priority target time. This mark is hit in the first quarter of the fiscal year 2008‒09.

2010: Dr. Tim Rutledge, who was the Medical Director of Emergency Services and Chair of the Medical Advisory Committee, became President and CEO.