Dr. Rick Penciner knew North York General Hospital (NYGH) was the place where he wanted to practice when he graduated from medical school in 1991. Over the years, his hospital of choice hasn't changed, but his career has been anything but static.

When he first arrived as a Family Medicine Resident, Dr. Penciner was only one of 16 first-year interns at the hospital – a far cry from the hundreds of medical and health professional learners who study and now serve at NYGH. “Every third night you'd be on call,” he remembers. “It was a busy, stressful year but I learned a lot, we all grew together as a team and we interns really became immersed in the culture of the hospital.”

Starting his career at North York General offered other personal and professional benefits. For one, at this time he met a nurse, Jane, who would later become his wife, with whom he would have three children. Second, while he didn't realize it, Dr. Penciner was about to become part of a burgeoning medical specialty known as emergency medicine. Until then, the Emergency Department had been staffed mostly by family physicians who would call in specialists to treat some of the more complex cases. In emergency medicine, physicians would be required to have knowledge and skills to treat a full spectrum of physical and behavioural disorders.

“We felt emergency medicine was a specialty in its own right and advocated heavily for it,” he says. “And I'm not being facetious by saying the shows such as ER (which started in 1994) really helped our cause. That show helped people understand that our area was a completely different realm.”

Under the mentorship of Dr. Isser Dubinsky, then the Chief of Emergency at North York General, Dr. Penciner and his fellow physicians began to hone their craft. (Dr. Dubinsky would also become the founder of NYGH's Emergency Medicine Update, the largest emergency medicine conference in the country). Dr. Penciner would eventually become one of the first two full-time ED physicians (the other being Dr. Arun Sayal — See a video on Dr. Sayal). The positions were created by Dr. Tim Rutledge, then the ED Chief, now NYGH's President and CEO, who was also instrumental in shaping emergency medicine at the hospital.

A passion for teaching 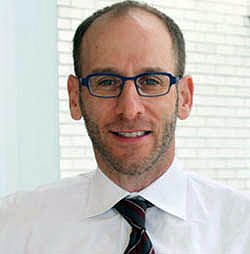 At the same time, another area of focus was demanding his attention: teaching. Inspired by the impact of former teachers and mentors such as Dr. Dubinsky and Dr. Rutledge, Dr. Penciner knew that teaching brought out the very best in him, the people around him and the hospital as a whole.

"There was a core group of us who just loved teaching,” he says. “It made our job interesting, it made us better clinicians and we felt an obligation to give back. Even now, I can't imagine not having learners around me. It would be boring.”

As his interest grew, he focused more and more on the education of new health care professionals. From 2005 to 2010, he was the Director of Emergency Medicine Undergraduate Programs at University of Toronto, responsible for overseeing the training of approximately 250 students placed in GTA hospitals. He was also becoming more immersed in the world of continuing education for medical professionals.

“It's different than teaching medical students,” he says. “You're teaching practicing physicians and colleagues how to augment their knowledge and skills and for me, learning how to develop effective programs for them.”

After enrolling in two intensive teacher education programs at the Centre for Faculty Development, Dr. Penciner would go on to complete his Master's in Health Professions Education and eventually land his current position of Director of Medical Education at NYGH's Centre for Education.

The challenge of cycling

As a self-professed “education geek,” Dr. Penciner is not afraid to mix two seemingly different areas together to create new learning opportunities. One of these hybrid creations is Emergency Medicine Update Europe, which combines his love of cycling (he estimates he cycled about 6,500 km last year with his cycling club) with emergency medicine continuing education. Testing a hunch that exercise could be beneficial to learning, he created the course for emergency department professionals to learn more about their profession combined with group cycling and hiking challenges. He would later even embed a researcher in the group to study their learning habits and results.

“When you face challenges together, your mind opens and becomes more receptive to new thinking,” Dr. Penciner says. He also says biking has helped him in the ED. Even a terrible biking accident that left him with multiple fractures has not deterred him from cycling. “I can't imagine my life without cycling,” he says. “I use the same techniques in biking and at the hospital when things get tough – deep breathing, focus – and it helps me to push through.”

When it comes to the next phase of his career, Dr. Penciner is more interested in taking stock of what North York General has given him.

“At the end of the day, I feel extremely fortunate for all the opportunities I've had working at NYGH. I met my wife here, I've been able to shape an exciting career that straddles my two passions of education and emergency medicine and I've been surrounded by incredible people. I'm motivated to share what I've learned and give back.”

This article first appeared in the March 2017 issue of The Pulse.