Michelle Fink remembers weekend trips to North York General Hospital (NYGH) as a fun way to spend time with her dad, Dr. Warren Sinukoff. At five years old, she loved going up to the maternity ward where she would get cookies and attention from staff while her dad checked on his newest patients, the babies, and their mothers. 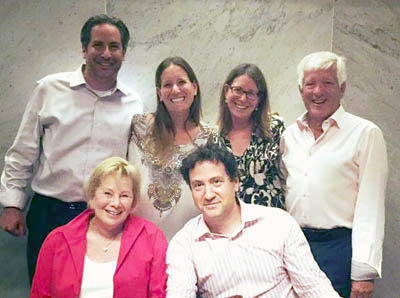 “Everyone treated me so kindly,” Michelle recalls. “It was such a welcoming environment and people were so friendly.”

Dr. Sinukoff is a Family Physician affiliated with North York General and was one of the four residents who were the first trainees in family medicine back in 1970. As NYGH celebrates its 50th year in the community, Dr. Sinukoff reflects on his decision to pursue family medicine at a brand new hospital.

Dr. Warren Sinukoff (top right), started his career as a Family Physician at North York General Hospital in 1970. He is with his daughters, Michelle and Alyssa, along with sons-in-law Mark and Jason, and wife Sheila.

“I hung out in the emergency room and met all the doctors working there; surgeons would let me tag along to observe interesting cases and many people were willing to take me under their wing to show me the ropes,” says Dr. Sinukoff. “Even as a trainee it was very hands on, not ‘downtown-ish', meaning if you showed interest and wanted to work, the physicians went out of their way to make sure you got experience.”

After he graduated Dr. Sinukoff knew he wanted to return to NYGH. He chose to do his internship (now called a residency program) here knowing his thirst to learn more and his eagerness to care for patients would be welcome. This year, he is celebrating 47 years in practice, which he describes as an honour and privilege.

Treating people not just the illness

Dr. Sinukoff was drawn to family medicine for many reasons, but mostly because he enjoyed getting to know his patients in order to treat them and not just their illness or disease. For much of his career, being a family doctor also involved overseeing any of his patients who needed to be in hospital. That meant many weekends performing patient rounds at the hospital — but he also wanted to spend time with his children.

“On the weekends I would bring my girls to the hospital to show them what I do,” says Dr. Sinukoff. “I really enjoyed the experience of taking them to the obstetrics wing as well as the paediatric and medicine floor.”

The connection that Dr. Sinukoff and his family have to NYGH runs deep — both daughters were born at the hospital and he himself has been a patient when he needed knee surgery. Michelle is always recommending the hospital to family and friends who are seeking care, especially for delivering babies.

“When I think of all the changes that have occurred at the hospital over the decades, for example, the sheer size of the place, amount of patient care, all of the new specialty programs such as Genetics and Cancer Care, I am truly in awe of how it has grown leaps and bounds,” says Dr. Sinukoff. “It is truly a special place.”

This article first appeared in the April 2018 issue of The Pulse.