On March 8, 2017, the federal government passed an anti-genetic discrimination bill — Bill S-201 — that forbids insurance companies and employers from obtaining Canadians' test results for genetic diseases or conditions. North York General Hospital (NYGH) Genetic Counsellor Clare Gibbons has been a key supporter of the bill, travelling several times to Ottawa to offer her perspective on how genetic discrimination impacts patients and families.

“It’s an incredibly important issue,” Clare says. “People need to be able to be tested for genetic disorders and diseases without fear of being denied insurance or even employment. Without this legislation in place, patients and families are rightfully nervous.”

Clare’s involvement in anti-genetic discrimination began in 2012 when her professional association – the Canadian Association of Genetic Counsellors – took a strong stance on the issue. As the past president of CAGC, Clare was invited to speak to the Senate Standing Committee on Human Rights in 2014, and again to the House of Commons’ Standing Committee on Justice and Human Rights in 2016. 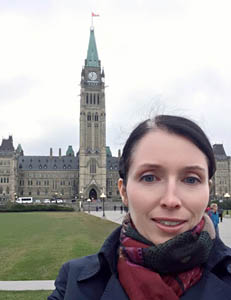 In the hearings, Clare highlighted a real example of how genetic discrimination impacts patient care. “We recently saw a patient with colon cancer who was offered testing for something called Lynch syndrome, a genetic condition that increases the risk of not only colon cancer but several other cancers,” she says. “If the patient tested positive for Lynch syndrome, their close relatives could also be identified and screened.”

Ultimately, the patient declined testing for the condition because they were concerned about genetic discrimination against their relatives.

“This is not an isolated event,” Clare says. “Fear of genetic discrimination is very real for many genetic disorders such as Huntington disease or inherited cancers. Hopefully Bill S-201 will give patients and families the reassurance that they have protection against genetic discrimination. It is important to remove barriers so that people are not fearful of genetic testing because genetic tests reveal important information that helps patients make better health care choices and improves outcomes.”

This article first appeared in the April 2017 issue of The Pulse.