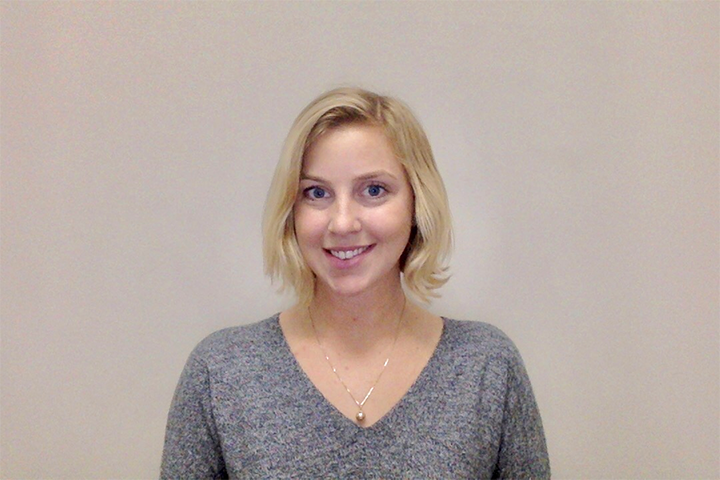 Kristin Collins is an Occupational Therapist from the Geriatric Day Hospital interdisciplinary team at North York General Hospital (NYGH). She works closely with older adults including persons with dementia every day, in a team where the occupational therapist, recreational therapist, rehabilitation assistant and volunteers play a vital role in providing cognitive stimulation activities throughout the program, as well as linking patients to appropriate community services following discharge. Kristin was recently awarded $50,000 from the Centre for Aging + Brain Innovation (CABHI), Spark program; and $7,500 from the NYGH Exploration Fund, for the project “Exploring the benefits of Cognitive Stimulation Therapy as a Tool for Chronic Disease Self-management for Persons with Dementia”. “I’m extremely grateful for the support from both NYGH and CABHI,” Kristin says. “Thanks to this funding, I believe we’ll be able to make real progress in caring for people with dementia.”

Dementia is an overall term for a set of symptoms that are caused by disorders affecting the brain, it is not a specific disease. Symptoms may include memory loss and difficulties with thinking, problem-solving or language, severe enough to reduce a person’s ability to perform everyday activities. Many diseases can cause dementia, the more common types include Alzheimer’s disease, vascular dementia, frontal lobe dementia, and Parkinson’s disease. Dementia is now acknowledged as a chronic disease; one that is progressive and without treatment, only symptom management. Presently, there are a half million Canadians living with dementia with 25,000 new cases diagnosed every year. By 2031, that number is expected to rise to 937,000, an increase of 66 per cent. Worldwide, around 50 million people have dementia, and there are nearly 10 million new cases every year. Dementia has a physical, psychological, social, and economic impact, not only on those affected, but also their carers, families and society at large.

Standard of care for patients diagnosed with dementia

Currently the standard of care for those once diagnosed with dementia is fragmented. Often after giving the diagnosis of dementia, the physician provides the individual and family with information for community resources (i.e. Alzheimer’s Society or other community agencies). Physicians are then unaware of whether individuals have followed up with said recommendations until the individual returns for their follow up visit. This may lead to a missed window of opportunity to provide early intervention to maintain and improve cognitive health.

“Improved access and coordination is a top priority when it comes to caring for people with dementia in Ontario,” Kristin says. “Through better planning, I believe we can make a real difference.”

After a diagnosis, the Alzheimer’s society is one of the main resources both online and in person for individuals or families to help access appropriate services. There are also a variety of cognitive stimulation programs and activities run in retirement homes and in individuals’ homes by private caregivers.

“These programs do not adequately target all community dwelling adults, nor are they attached to a specialized geriatric clinic to allow for improved access, quality and monitoring of services,” Kristin says. “Some also do not have the same high quality evidence base for their interventions that demonstrate cognitive health benefits for persons with mild to moderate dementias like Cognitive Stimulation Therapy. A cohesive approach is key.”

Innovation in the field of dementia

The proposed solution to be implemented with the CABHI and the NYGH Exploration Fund awards will be to apply Cognitive Stimulation Therapy as a community-based program offered within the regular standard of care at the Specialized Geriatric Services at NYGH.

“We hope this will bridge some of the gaps and improve care currently experienced by persons with dementia living in the community that are followed by our geriatric services,” says Kristin.

Cognitive Stimulation Therapy is the first ever evidence based psychosocial intervention with demonstrated effectiveness, irrespective of drug therapies for treating dementia. The World Alzheimer’s Report from 2011 also identified that Cognitive Stimulation Therapy should be routinely provided to those living with early stage dementia. It aims to provide cognitive stimulation for general cognitive improvement, cognitive training to improve specific cognitive aspects, and cognitive rehabilitation to improve personally relevant functional abilities. This therapy demonstrates both clinical benefits (cognition, functional autonomy, mood, behaviour) as well as psychosocial benefits (well-being, social inclusion, quality of life, delay in institutionalization, global cost savings). Additional bonuses include positive mindset for family/caregivers, provide methods/strategies to prevent and solve behavioural problems, cope with functional decline and the emotional consequences of dementia. The method itself already has great success in the UK as it is a standard of care for the National Health Services (NHS) geriatric and memory clinics to provide access to a Cognitive Stimulation Therapy program in the community to individuals with an early dementia diagnosis. Kristin will also be collaborating with the developers of Cognitive Stimulation Therapy based out of the University of Nottingham in the UK.

“Having the support and guidance of the authors of the Cognitive Stimulation Therapy program allows for a collaboration that will benefit the success of this innovation program here at NYGH, and potentially across Canada” she says.

As per the Canadian Alzheimer’s society, self-management for dementia is one of the most pressing needs and this is echoed within the greater Alzheimer’s knowledge exchange network. Kristin’s research could demonstrate the need to add Cognitive Stimulation Therapy as a standard within Canada by providing new evidence not previously studied; including its potential benefit to improve self-management skills which would empower community dwelling persons living with dementia.

“We hope that our program will allow them and their caregivers to feel more confident with aging at home. Becoming an active participant in their health may also contribute to feelings of hope,” Kristin says. This research will allow for innovation in the field of dementia and to demonstrate a need for program growth and extension as it aligns with the senior’s health strategy at both an organizational level as well as the future potential benefits to an Ontario Health Team. The success would be particularly relevant as the province continues to transition to increased home care services as the priority for aging in place at home remains.