Learn more about our surgeons:

Dr. Yasser Botros completed his residency training in general surgery at the University of Toronto. During his training he was the recipient of many local awards. He is currently a Fellow of the Royal College of Physicians and Surgeons of Canada since 2002. He went on to do a 2-year Community General Surgery Fellowship at North York General Hospital where he currently is a Staff General Surgeon running a very busy practice since 2004. In 2006 he became a Lecturer at the University Of Toronto, Division of General Surgery.

His areas of clinical interest and expertise include sphincter preserving operations, inflammatory bowel disease and colon and rectal cancer. Dr. Feinberg feels fortunate to be part of the team which puts patients first in the care of gastrointestinal disease.

During his residency, he was awarded several residency teaching awards including the Canadian Association of General Surgeons (CAGS) Resident teaching award and University of Toronto award for resident mentorship. He was chief fellow during his fellowship in Surgical Oncology, and is the only general surgeon to ever be awarded the prestigious Zane Cohen Fellowship Award from the University of Toronto.

Dr. Hameed is one of only a handful of North American surgeons trained in Transanal Minimally Invasive Surgery (TAMIS), and Transanal Minimally invasive surgery (TA/TME), novel surgical techniques that allows for removal of rectal tumours without the use of a major incision, and in some patients, reducing the chance that they will require a permanent colostomy. He is co-director of the Canadian TaTME Proctorship Network, which invites colorectal surgeons from across Canada to train in this innovative technique. His research interest focuses on surgical innovation, enhancing patient and resident education using 3D rectal cancer models, as well as exploring novel uses for image-guided surgical navigation in rectal cancer with the goal of reducing surgical morbidity.

Dr. Donna McRitchie is an Assistant Professor in the Department of Surgery at the University of Toronto and Vice President of Medical and Academic Affairs at North York General Hospital.

Donna trained in General Surgery at the University of Toronto after completing a Bachelor of Science in Nutritional Sciences. During her surgical training, she obtained a Master’s of Science at the Institute of Medical Science. She subsequently did fellowship training at the Shock Trauma Center at the University of Maryland in Baltimore, then another fellowship in Critical Care at the Harvard program in Boston.

After returning to Toronto, Donna was a General Surgeon, Trauma Surgeon, and Intensivist at St. Michael’s Hospital for six years before coming to North York General in 2000 where she was Medical Director of Critical Care and Division Chief of General surgery from 2000-2013.

Donna has a special interest in benign and malignant diseases of the breast but has a broad practice in General Surgical problems.

Advanced fellowship training in Surgical Oncology at the University of Toronto allowed him to acquire expertise in caring for patients with gastrointestinal and breast cancers. This training included a focus in minimally invasive techniques for the management of colorectal cancers.

Dr. David Smith completed Medical school and General Surgery training at the University of Toronto. He has been on staff at North York General Hospital since 2001 and has a broad general surgical practice.

Dr. Smith enjoys working with the multidisciplinary teams at North York General and is proud to be able to offer his cancer patients access to top rate multidisciplinary cancer conferencing and a highly collaborative surgical team. He shares the organizational commitment to continuous quality improvement to ensure patients get the best possible care.

In 2014, Dr. Smith was named the Chief of Surgery and Program Medical Director at North York General Hospital.  Learn more

Dr. Peter Stotland is fellowship-trained Surgical Oncologist who completed residency in general surgery at the University of Toronto and is the recipient of many local and national teaching awards.

His clinical practice is focused on the treatment of the gastrointestinal malignancies (tumours) and implementation of minimally invasive techniques. He has been at the forefront of using new surgical techniques such as TAMIS and TaTME. North York General Hospital (NYGH) is one of only a few hospitals in Canada that offers transanal minimally invasive surgery (TAMIS) for colorectal cancer. TAMIS is a procedure that removes tumours in the rectum faster than traditional procedures, causing less pain and a shorter recovery time.

Dr. Stotland and his surgical colleagues also perform laparoscopic gastrectomies, making NYGH one of only three hospitals in the GTA to do so. In addition to specialized surgeries, more breast, colorectal and other gastrointestinal surgeries are done at North York General than any other hospital in the Central Local Health Integration Network.

As testament to his commitment to mentoring young surgeons, Dr. Stotland has been recognized with a number of major teaching awards in recognition of his teaching performance, including the Integrated Medical Education Award for Excellence in Community‐Based Teaching, Faculty of Medicine, University of Toronto and The Robert Mustard Mentorship Division of General Surgery, University of Toronto. 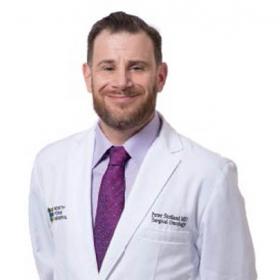